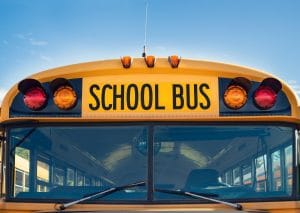 Automated school bus stop-arm cameras are being used in some locations across Arizona and in many other places across the nation. The goal of the cameras is to help monitor drivers who fail to obey the legal requirement to stop when a child enters or exits their school bus. The cameras are operable when the stop-arm is deployed and the lights of the school bus are flashing.

One area employing these cameras is the Arlington, Virginia Public School system.

The cameras are visible and officials hope they’ll serve as a deterrent to those breaking the law. They work in the following ways:

There is some variance among different jurisdictions about whether the images and video are admissible in court. However, the video and images can be useful if a child or parent is hurt at the school bus crossing by identifying the car that was at fault so that the owners can be held accountable.

According to Arlington Public Schools, more than 400 children across the country have been killed by a driver who passes illegally during the past four decades. The cameras are necessary because the police simply can’t monitor all the buses across every school district.

The camera view from Arizona

According to Channel 12 News in Arizona:

At Plattner Verderame P.C., our Phoenix school bus accident attorneys understand that parents place their child’s safety in the hands of school bus and other motorists. When someone’s careless driving causes a child injury or wrongful death, we fight to hold all responsible people accountable for the harm to your child.

For help with any school bus accident case, call our respected trial lawyers today at 602.783.8793 or use our contact form to make an appointment.