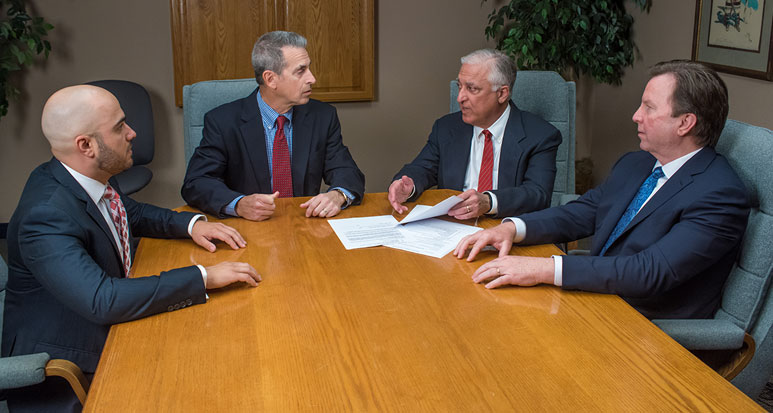 Since 1991, Plattner Verderame, P.C. has fought for the rights of injury victims throughout Arizona. Over the years, we have obtained significant verdict and settlement amounts for our clients. We invite you to review some of the awards we have obtained on their behalves, and to contact us if you have any questions.

$17.5 million settlement: Child born with birth defects due to chemical exposure to mother. 2016.

$11 million settlement: Child born with birth defects due to chemical exposure to mother. 2017

$10 million verdict: Airplane crash involving serious injuries to passengers of a small airplane on a sightseeing trip over the Grand Canyon. 1994.

$9.5 million settlement: Child born with birth defects due to chemical exposure to mother. 2014.

$7.2 million settlement: Child born with birth defects due to chemical exposure to mother. 2017

$5.5 million judgement: Settlement for $500,000 cash plus a $5,500,000 judgment and assignment of rights against insurer. Suit against the City of Phoenix for police negligence in 1968, when then-5-year-old client’s father burned the family house down. 1998.

$5 million settlement: Child born with birth defects due to chemical exposure to mother. 2017

$3.5 million settlement: Medical malpractice case against a doctor and hospital in Ohio for the wrongful death of a 26-year-old mother. 1993.

$3.3 million settlement: Suit against a drunk driver and his employer for brain injury and other injuries to family members. 2009.

$3.2 million verdict: Against State of Arizona. In 1990, a young woman who lost both legs from freezing after being stuck in her car on a state highway in the mountains. During a storm the state closed the road for the winter and never checked for motorists already on the highway trapped by drifting snow.  See Up And Running, The Jami Goldman Story, by Goldman & Caga. 2001.

$3 million verdict: $1 million for compensatory damages plus $2 million punitive damages. Case involved the death of an emotionally disturbed institutionalized 10-year-old boy, who jumped out of a school van. 1996.

$2.75 million settlement: Lawsuit against a City in Arizona for negligence of one of its drivers resulting in brain damage to a 5-year-old boy. 2002.

$2.3 million award: Airplane crash at an air show involving the death of a young boy. The case was resolved at arbitration. 2014.

$1.9 million judgment: A medical malpractice case where a 60-year-old man was given an overdose of drugs while at an Arizona hospital. 2009.

$275,000 verdict: (minus comparative fault) TMJ injury caused by dentist during removal of wisdom teeth. No settlement offer by dentist. 1992.

Confidential 7-figure settlement: Medical malpractice case involving the death of a 65-year-old woman in an Arizona hospital. The doctors involved were also sanctioned by the Arizona Board of Medical Examiners. 2016.

Confidential 7-figure settlement: For passenger in small airplane which crashed due to errors by air traffic control and pilot. 2015.

$1,000,000 settlement: For young woman on bicycle hit by a pickup truck. She suffered orthopedic injuries, PTSD, and mild brain injury. 2012.

$2,000,000 settlement: Against trucking company which lost a trailer wheel on the highway, causing client to swerve off road into a tree. Partial paralysis. 2010.

Confidential 7-figure settlement: Against Asian and Arizona adoption agencies for failure to disclose medical records which would have revealed serious congenital brain injury in adopted baby. 2003.

$700,000 settlement: Young man with cerebral palsy and no ability to speak who was molested while in foster care. 1999.

Confidential settlement: For wrongful death of elderly woman with end-stage renal disease, killed when driver of van transporting her to dialysis negligently failed to buckle her seatbelt and caused crash. 2009.

Confidential settlement: Against hospital for death of 72-year-old man when nurse gave the wrong contrast material to doctor during a lumbar scan. 2008.

Confidential settlement: Against doctor who prescribed Reglan for long-term use and caused permanent tardive dyskinesia. 2005.

Confidential settlement: Against State of Arizona for driver injured when his semi-truck went over the side of a freeway ramp in high wind due to the side walls being too short. 2006.

Confidential dental malpractice settlement: After successful appeal to Arizona Supreme Court establishing rule that doctor’s concealment of cause of post-treatment pain prevented the statute of limitations from running. 2003.

Confidential settlement: Woman with cardiac injury after Emergency Room doctor misdiagnosed her heart attack as indigestion and sent her away. 1998.

Confidential settlement: Death of a teenage boy killed when the driver of the car he was riding in rolled over. Driver claimed the young man wasn’t wearing his seatbelt.

Please note: the awards listed above are in no way a guarantee of future awards for other cases. Every case is different, and we cannot guarantee outcomes.

“Warm, caring people that go the extra mile. They’ll tell you exactly what the situation is and what to expect. I can’t thank them enough for all of their help!”
– Andrea Sarich, 5.0 rating ★★★★★