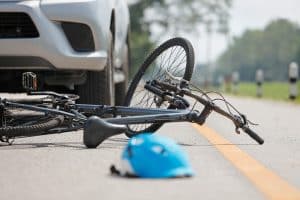 It’s clear – if a car or truck comes barreling down the road and strikes a bicycle rider, the cyclist will be lucky to survive. Even when vehicles are traveling slowly, the bike rider is usually pitched off the bike and often strikes the ground with his/her head. Bicycles lack protective frames for the rider. Bicycle helmets, if worn properly, provide some protection for scalp and skull, but they provide minimal protection from brain injuries.

A 2021 study from the Centers for Disease Control and Prevention (CDC) analyzed ER care for bicycle accident victims who suffered head trauma, and were treated by an ER department, for the decade 2009 to 2018. The study estimates that emergency departments (EDs) examined nearly 600,000 bicycle-related TBIs during that period. The rates of bicycle-related TBI victims were highest among adult men and minors aged 10-14 years. The good news is that the yearly numbers declined as the decade wore on. The overall implications of the analysis are that some of the key factors in avoiding bicycle-related TBIs include better traffic laws, better bicycle infrastructure, and more helmet use, along with targeted interventions.

The study was implemented due to the following concerns, among others:

Some of the leading discussion points from the CDC study

The CDC discussion of their review highlighted the following:

The study also includes some caveats about its reliability:

What are common head and brain injuries from bike accidents?

Some of the common types of head trauma from a Phoenix bicycle accident include:

Other head injuries that may be due to an crash include fractures and damage to the eye sockets, jaw, nose, cheekbones, and forehead.

Anyone who experiences an accident and blow to the head should seek immediate medical care at the closest emergency room. If the police are called to investigate the accident, they will often arrange for an ambulance or an emergency medical transport to the ER.

At Plattner Verderame, P.C., our Phoenix bicycle accident lawyers seek compensation from careless drivers and other liable defendants for all your damages. While some brain injury victims may be released after an examination, many others may require surgery and extensive rehabilitative care. The cost of all medical care for a TBI can be quite expensive. The pain and suffering can affect every part of your life, including your ability to work, take care of your family, and enjoy your life. To speak with our experienced and respected bicycle accident lawyers, call our offices in Phoenix or Tempe or complete our contact form to schedule a free consultation today.