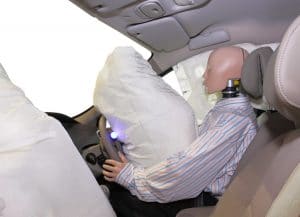 From a road safety perspective, apparently, it is a man’s world. In an excerpt of a piece published in The Guardian, the author writes about how women are put at risk on the roads because cars are designed around a male body. From the vehicle’s safety features to how the seats are constructed and installed, and how the restraint systems work, a male crash-test dummy was likely used to calculate those features.

Men are more likely than women to be involved in a car crash, but a woman is 47% more likely to be seriously injured in a car crash, 71% more likely to be moderately injured and 17% more likely to die. Thanks to a thing called the gender data gap, automotive safety is largely geared towards the 50th percentile male body: car seats and pedals are designed to suit an on the average a taller, heavier body. The Guardian article reported that many women are “out of position” drivers because they must move the seat closer to the wheel so that their legs can reach the pedals and so they can see over the dashboard, a height which is determined by a male body’s proportions.

Women are apparently at higher risk in rear-end collisions because they have less muscle in the neck and upper torso which makes them up to three times more vulnerable to whiplash. In 2018, a Swedish traffic safety researcher reviewed all the European Union’s crash test requirements, and none of the tests used an anthropometrically correct female crash test dummy.

Better to save stars than lives, it seems, for many companies.

But not all of them appear to feel that way. Some of the major automakers have risen to the challenge: Volvo created the E.V.A. Initiative (Equal Vehicles for All), which looked at 40 years of crash data and shared its findings – for free – with the industry. Volkswagen appears to have partnered with a company to make crash test dummies that mimic obesity, and the posture of older drivers.

As we move toward the future with autonomous vehicles, to a time when the driver of the vehicle will not be sitting in an upright, alert position behind the wheel, the ways in which seat belts protect drivers and passengers will also have to change. It seems strange to think that those decisions will be made by manufacturers, but until people demand more, that is all we have.

If you have been injured in a car accident, an experienced car accident attorney at Plattner Verderame, P.C., can help. To schedule a free consultation, you may call our Phoenix office today at 602-266-2002 or fill out our contact form. We proudly represent our clients throughout the state of Arizona.