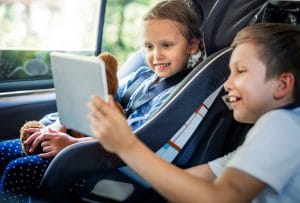 Imagine coming across two cars involved in a car accident on the highway. Imagine that one of the cars is flipped over and the front of the other car is seriously damaged. Even more alarming, imagine seeing a car seat in the back of one of the vehicles. The damage from the accident already indicates that the two drivers involved are lucky to be alive. However, the thought that a child was involved or could be seriously injured adds another grave layer to the accident.

The force and impact caused of a car accident can cause adults with fully formed bones, nerves, and tissues to experience serious injuries. For newborn babies, toddlers, and children who are still growing, it can be significantly worse.  Children can sustain life-altering injuries such as:

A traumatic brain injury can occur when a victim endures a serious blow to the head. Because children’s skulls are still fragile, children involved in accidents can easily receive significant injury to the head. Newborns that are under twelve months old are most at risk of suffering from serious brain injuries like concussions and contusions, and children between the ages of one and seven are at risk of suffering from severe skull fractures.

The force of the crash can throw a body forward as the seat belt tightens; this is why so many adult car accident victims end up with bruising across their chests. For children, however, the force may be enough to crack their ribs or sternum, leading to punctured lungs or kidneys or even heart damage. This can lead to permanent respiratory, renal, or cardiac issues.

One of the most critical injuries children of all ages can endure are broken or fractured bones. Children’s bones are more fragile than an adult’s bones, making the injuries sustained in an accident even more catastrophic. Children’s bones are still in the process of growing, and can easily fold and buckle from the force of a car accident. A fractured, broken, or crushed growth plate can cause crooked or deformed limbs, or lead to stunted growth.

Among the most devastating injuries are those to the spine and spinal cord. And while spinal trauma is not common for children in accidents, younger victims usually sustain more severe injuries. According to research published in Traffic Injury Prevention:

What are the psychological effects of car accidents on children?

The emotional and psychological effects that children endure from car accidents are also significant. While in many cases, the children’s body parts can and will heal, the emotional scars can last months and even years after the accident occurred. According to the National Child Traumatic Stress Network (NCTSN), traumatic incidents like car accidents can cause children to experience a combination of strong emotions and physical reactions.

Whether the child endures physical injuries from a car accident or not, children involved in car accidents can suffer from some form of post-traumatic stress disorder (PTSD). PTSD is a “mental health condition that’s triggered by a terrifying event — either experiencing it or witnessing it. Symptoms may include flashbacks, nightmares and severe anxiety, as well as uncontrollable thoughts about the event.”

How is a child’s cognitive development affected by a car accident?

In addition to a child’s physical development, a child’s cognitive development can be affected from a car accident. Traumatized children can experience issues with concentration, learning difficulties, and issues with language and speech. Children may also struggle with understanding the consequences of their behavior.

Each and every day, hundreds of innocent children and adults are injured in car accidents across the state of Arizona. Plattner Verderame, PC, fights for honest people with honest injuries. We are experienced lawyers who thoroughly prepare each case for jury trial. Call our Phoenix car accident lawyers at 602-266-2002, or submit our contact form today to arrange a free consultation. We also maintain an office in Tempe.