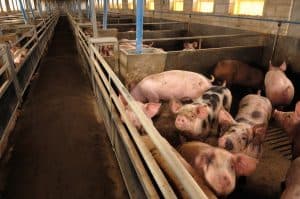 Despite their reputation, pigs are clean animals. If given enough space, they’ll stay far away from their own waste. They’ll clean off their food if there’s water nearby. And the wallowing in mud? Not only does it cool them down (pigs don’t have sweat glands), but it keeps ticks, lice and other parasites at bay. Overall, a pig will do its best to stay clean.

But that isn’t possible on an industrial-sized farm, where animals are crammed together in small spaces in order to maximize the number of pigs the farmers can raise. The more animals there are, the more waste they produce – about 500,000 million tons each year, per Mother Jones. (Note: this is all livestock, not just pig farms.) That much manure in the hot, North Carolina sun is bound to produce two things: a stink you cannot forget, and an unfathomable number of flies. That’s why 10 plaintiffs filed a nuisance lawsuit against Murphy-Brown (part of Smithfield Foods), which owned the Kinlaw Farm in Bladen County, NC. According to their complaint:

Plaintiffs have suffered episodes of noxious and sickening odor, onslaughts of flies and pests, nausea, burning and watery eyes, stress, anger, worry, loss of use and enjoyment of their property, inability to comfortably engage in outdoor activities, cookouts, gardening, lawn chores, drifting of odorous mist and spray onto their land, inability to keep windows and doors open, difficulty breathing and numerous other harms.

What all of this really boils down to is this: the smell is so overpowering, and the flies and pests so numerous, that the people who live near the farm are unable to simply live their lives. Not only can they not go outside and enjoy their own property, but the stench gets into their clothing even while they are in their own homes. They carry that smell with them to the grocery store, to work, to their children’s schools. That stink settles deep into fabric; can you image what their cars must smell like?

To add insult to injury, the plaintiffs in this case were there first. Per Policy Watch:

The plaintiffs had inherited their land and built their homes long before Kinlaw Farms moved in next      door. Before Kinlaw Farms extended Pearl Lloyd Road and called it Porky’s Lane, where it dead-ends at the industrialized hog operation. A cornerstone of nuisance law is that the statutes should favor whoever had arrived first.

The plaintiffs had their homes, were enjoying their lives, and the farm came in with its stench and flies, changing everything. Laws all over the country explain that that is the essence of a nuisance.

In 2017, NC Governor Roy Cooper vetoed a bill that would have curbed the rights of plaintiffs in nuisance lawsuits specifically against hog farmers, but the state legislature overrode him and passed it into law anyway. (It is worth noting that Policy Watch reports there was “intense public opposition” to the law.) The new law limits the amount of compensatory damages plaintiffs may be entitled to collect. The original bill had a provision to make such limit retroactive, but that provision was struck.

That is important, because this lawsuit was filed long before the law was passed, and as such, was “grandfathered in,” so those limits do not apply. The case took three weeks, but the jury only needed three days before handing the verdict to the plaintiffs “$75,000 in compensatory damages, plus $5 million in punitive damages” per plaintiff. Smithfield, of course, plans to appeal.

Creatures from the odoriferous lagoons

There are around 15,000 hogs on Kinlaw Farm. An adult swine can produce up to 4 lbs. of feces a day. That amounts to about 60,000 lbs. a day on Kinlaw Farm’s land. And pig waste is, according to experts, the worst-smelling waste there is (it includes a compound called cadaverine, which reeks like rotting flesh).

This is not a problem unique to Kinlaw Farm, though; according to National Hog Farmer:

In the U.S., 44 of the 50 states have regulations that deal directly or indirectly with odors from concentrated animal feeding operations (CAFO). Ten states have direct odor regulations, which means they have specific rules that prohibit odor emissions greater than their standard…. Another 34 states have indirect regulations — such as setbacks, permits, public comment periods and manure handling training — as methods to reduce odor from feedlots.

North Carolina, however, doesn’t have many of those “odor laws” on the books, though it does require setbacks – how far the waste must be from its neighbors – of 75 to 5,000 feet.

At Kinlaw, the waste treatment method of choice is the anaerobic lagoon, an open-air, man-made pit designed to hold waste until it has broken down and liquified, after which it is sprayed onto nearby fields. As the Charlotte Observer describes the lagoons, these “open-air sewage pits on their properties were the source of noxious, sickening and overwhelming odors. The stench was so thick, the neighbors argued, that it was impossible to get it out of their clothes.”

Why Smithfield should be worried

This trial was considered a bellwether: there are 26 more federal cases, with multiple plaintiffs, planned for later in the year – and North Carolina isn’t the only state that farms hogs. If this decision sets precedent for future cases, Smithfield could find itself responsible for millions more in damages. And if Smithfield is held responsible, so might other large-scale, global corporations which care more about their profits than about being good neighbors.

Plattner Verderame, P.C. is the firm you trust to protect your future and uphold your rights under the law. We handle complex nuisance lawsuits for clients throughout Arizona. To learn more about our services, or to schedule a free initial consultation with an attorney in our Phoenix office, please call 602-266-2002, or contact us to discuss your legal options.