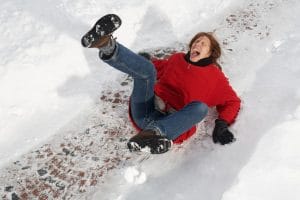 The person who is injured, with the help of Phoenix premises liability lawyers, also needs to show that the dangerous condition, such as an accumulation of snow and ice or spilled liquids, caused their injuries. Common fall injuries from slipping on ice or snow include breaking an arm to catch the fall, injuries to the back and spine, or cuts and bruises. In catastrophic cases, the victim could suffer a spinal cord injury, a traumatic brain injury if they hit their head in the fall, or even suffer wrongful death.

There are many ways to prove the property owner knew of the dangerous condition. These include photos, videos, statements by witnesses, and appropriate records such as weather statistics for the date of the fall or maintenance records for a business. That the dangerous condition caused your injuries, or a loved one to die, are usually shown through the medical reports and testimony of the doctors who treated you and through the testimony of the person who fell.

While Arizona is known for its warm climate, there are places where it does snow. According to Arizona Central, Flagstaff gets over 100 inches of snow each year, while many places just get a dusting. The more likely weather danger in Phoenix and elsewhere is that in the upcoming winter months, rain will freeze and cause treacherous conditions. Unlike northern states, Arizonians aren’t normally ready for ice and often just wait for the weather to warm up instead of salting or removing the ice. There’s a danger year-round that you might slip and fall on any liquid that hasn’t been cleaned up in a store or building.

As a general rule, property owners are allowed some time to respond to a known danger or a danger they should have known about if they had made routine inspections. For example, if a customer in a store spills a drink, the owner of the store does need to be allowed ample time to clean up the wet spill.

In snow and ice cases, the critical question usually revolves around how soon after the snow or ice fell that the fall occurred. There’s virtually no excuse for waiting too long to hire a cleanup crew to remove the snow or put salt on the ice – or for the owner doing the cleanup work themselves.

It is generally not a defense that the visitor should have seen the snow accumulation or a wet liquid. If the store is open, shoppers and visitors have the right to expect the parking lots, sidewalks, and inside of the store will be safe for walking. Likewise, neighbors have the right to walk on sidewalks in their community. If the fall is due to ice, it’s often because the injury victim didn’t see the ice or had no other path they could take.

At Plattner Verderame P.C. we also work to show what other neighbors and other businesses did to clear off the snow and ice that the owner of the property where you fell did not. For help with a slip and fall for any reason, call our experienced Phoenix premises liability lawyers at 602.783.8793 or fill out our contact form to make an appointment.