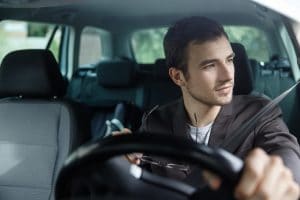 When there’s an accident on the road, most people want to see what happened. If a motorcycle rider is on the ground, a truck is turned over, a car has been pulled over by the police – the natural tendency is to look and stare. Unfortunately, this act of looking at an accident instead of the road (called rubbernecking) causes a lot of accidents.

According to a study in the Journal of Transportation Technologies, rubbernecking risks accidents in both directions of traffic – the lanes the driver is travelling in and the opposite lanes where the accident may have occurred. The study concluded that “about 10% of car accidents were caused by rubbernecking,”

When rubbernecking leads to accidents

Rubbernecking historically has included turning around to look at someone while they’re talking. The more current definition is turning to specifically observe a vehicle accident. Adding to the danger of an accident is that some drivers even take the time to use their smartphone to take a picture of the crash. Often, rubberneckers can lead to multi-car collisions:

Rubbernecking is a type of distracted driving

Driver distraction is a leading cause of car accidents and fatalities. According to the National Highway Traffic Safety Administration (NHTSA), distracted driving accounted for 2,841 fatalities in 2018. Distracted driving killed 1,730 drivers, 605 passengers, 400 pedestrians, and 77 bicycle riders.

Accident prevention begins with driver safety. Drivers should always focus on the traffic in front of them and not to the side. Law enforcement is also working on solutions, such as using screens to prevent anyone from looking into the accident site.

At Plattner Verderame, P.C., our Phoenix car accident lawyers investigate every reason why a car accident may have occurred. We fight to get victims compensation for their pain and suffering, medical expenses, lost wages, property damage, and other applicable damages. We file wrongful death claims for families when a loved one is tragically killed. To discuss your car accident case, call us at 602.266.2002 or complete our contact form to schedule a free consultation.