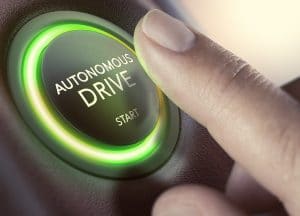 Autonomous cars are the wave of the future – or so the manufacturers of these vehicles would have you believe. There are all sorts of levels and degrees of autonomous cars. Most cars today have use sensors and other technology to help reduce the risk of an auto accident. This technology helps alert drivers that they’re too close to another car, another person, or another lane of travel. Some autonomous cars take full control of the car if the driver fails to respond to the alert.

The dream of many car and truck makers is that the vehicles will be completely self-driving. A fully self-driving car means that the vehicle won’t have a driver – just passengers. Already, Domino’s Pizza is advertising that the mushroom pizza and wings that you order will be delivered by Domino’s Nuro vehicle. The Nuro is a self-driving car. When the Nuro arrives at your door, you’ll enter a unique PIN to retrieve your order. The Nuro delivery system is currently being tested in Houston, Texas.

As autonomous technology advances, there are numerous concerns about the safety of the driving public. Vox recently profiled a story about a man who was seen seated in the back of a Tesla vehicle without a driver. Another Tesla incident involved two people who tragically died. The police raised concerns in both accidents that Tesla’s Autopilot feature (which is designed to provide some driver assistance) was being abused. The man in the first car was arrested. Several federal agencies are investigating the deadly second accident. Elon Musk, CEO of Tesla, and other Tesla executives dispute that the Autopilot feature was the cause of the fatal crash.

Tesla, like many other autonomous vehicles, uses cameras and sensors to enable crash-avoidance features and self-driving features. Tesla’s autonomous features are not as sophisticated as vehicles such as Google’s Waymo’s vehicles that are being built for full autonomy (full self-driving capabilities). Musk claims that Tesla cars will be fully autonomous soon.

Tesla’s Autopilot is more than just cruise control. The autopilot feature means that the car can steer itself and stay in the same lane – in addition to having a cruise control feature.  Tesla’s autopilot feature does require that the driver focus on the road and keep his/her hands on the steering wheel. Some drivers, like the man in the video discussed above, have figured out how to avoid the driver input part of Tesla’s Autopilot technology. Currently, the NHTSA is “investigating 23 crashes that may be due to Tesla Autopilot.”

Some of the latest autonomous technology features

According to Consumer Reports, cars, trucks, and SUVS are now being built with the following features to reduce car accidents:

Other crash-avoidance technology helps illuminate the area in front of the car as the car takes a curve, detects if a driver is tired by analyzing steering behavior of lane shifts, and helps the car fit into a parking spot.

The National Highway Traffic Safety Administration (NHTSA) regulates autonomous cars. States also have their own regulations. NHTSA is exempting some autonomous vehicles – for testing purposes only – normally on roads with little traffic. The US Congress is also beginning to consider laws to regulate autonomous vehicles and self-driving vehicles because the lack of driver control places a very high safety burden on the manufacturers of these vehicles.

Almost every, maybe every, vehicle that is built today relies on some computer software and hardware to run the vehicle. If you bring your car into a local repair shop or your local dealer, its’ a certainty that the repair shop or dealer will run a computer check of the car’s systems. New features are being added all the time.

The NHTSA uses a scale to categorize the level of a vehicle’s autonomous features. The scales range from 0 to 5. 0 means no autonomy. 5 means full-scale autonomy. Most vehicles have a Level 2 autonomy. Level 2 autonomy basically means the car can control its own speed subject to driver input (cruise control). Level 2 technology also includes emergency braking, lane assistance software, and other limited technology features.

While the NHTSA does have some procedures in place for testing certain autonomous features, the federal agency still hasn’t developed a set of federal standards for reviewing autonomous technology.

Some foreign countries such as Japan, Australia, and the countries of the EU have already passed autonomous legislation, but the US is still working on it. Members of Congress want the NHTSA to implement national standards to regulate autonomous technology and protect the public. Many car manufacturers also want the NHTSA to increase the amount of regulation of various types of crash avoidance features and self-driving capabilities.

One proposed law is the Stay Aware for Everyone (SAFE) Act. This law would require that the US Department of Transportation examine how driver assistance technology, such as Tesla’s Autopilot, are affecting driver attention/non-attention. Another proposed bill is the Crash Avoidance System Evaluation Act. This law would also increase regulation of the autonomous vehicle industry.

At Plattner Verderame, P.C., our Phoenix trial attorneys file wrongful death claims, product liability claims, and negligence claims when our clients have been injured in car crashes. We represent drivers, passengers, pedestrians, and bicycle riders who are injured in any type of car accident including accidents due to autonomous vehicle technology (or the lack of such technology). We demand compensation for your pain and suffering, medical bills, lost income, and property damage. Our lawyers represent the families of anyone who is tragically killed in a car accident. To speak with a highly respected and experienced car accident lawyer, please call us at 602.266.2002 or complete our contact form to schedule an appointment at our Phoenix or Tempe office.