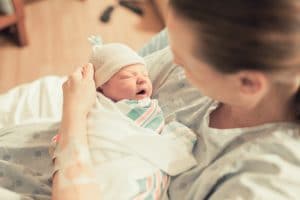 Birth injuries are often a result of preventable medical negligence that occurs during labor or delivery. Birth defects, however, develop during pregnancy, and may not be evident until the child is born. Many times, a birth defect is just an unfortunate anomaly that could not have been prevented; it was genetic, or related to an issue that could not be diagnosed.

Sometimes, however, birth defects are caused by the mother’s exposure to toxic chemicals from prescription medications take while pregnant, or environmental exposures at home or in the workplace. The father’s toxic exposure can also lead to birth defects.

What are birth defects?

The Centers for Disease Control and Prevention (CDC) defines birth defects as structural changes present at birth that can affect almost any part or parts of the body, how the body looks, works or both. Birth defects can range from mild to severe, and they occur in about 1 in every 33 babies born in the U.S. each year, or about 120,000 babies each year.

Employers are responsible for protecting their employees – both male and female – from toxic substances which might contain teratogens. Science Direct defines teratogens as any environmental factor that can produce a permanent abnormality in structure or function, restriction of growth, or death of the embryo or fetus. Last year, an Illinois appeals court accused Motorola of “willful and wanton misconduct” that caused several of the employees’ children to suffer birth defects in utero because their fathers were exposed to toxic teratogens at its semiconductor plants. (Courthouse News) Plattner Verderame is vigorously pursuing dozens of cases against Motorola for birth defects suffered by the children of workers in their microchip factories, and we have already successfully resolved dozens of these cases. We are proud of the difference we have made in the lives of these children and their families.

Examples of toxic chemicals that could cause birth defects include:

Some prescription medications are teratogenic, including:

If your child was born with a birth defect and you suspect it was caused by chemical exposure, you may have grounds for legal action. A Phoenix birth injury lawyer from Plattner Verderame, P.C. is ready to fight for justice for you. You may schedule a free consultation by calling us today at 602-266-2002 or completing our contact form.