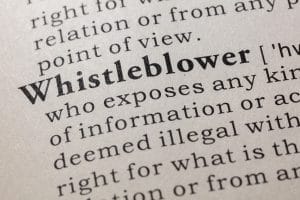 A whistleblower is a legal term. It refers to someone who discloses fraud, illegal conduct, or severe wrongs in accordance with a whistleblower statute. Many whistleblower claims are brought through the False Claims Act, in qui tam actions. This law, which was enacted during the administration of Abraham Lincoln, rewards people who disclose fraud involving governmental agencies. Originally, the False Claims Act covered the Department of Defense but it now covers Medicare, Medicaid and other agencies, too.

Other whistleblower laws cover fraud involving the Internal Revenue Service, the Securities and Exchange Commission, the Commodities Futures Trading Commission, the environment, the energy sector, and national security. You can also file a whistleblower action against a company which engages in corruption (like Courtland Kelley did, against General Motors, and Richard Bowen did against Citigroup).

Common examples of fraud that a whistleblower reveals include:

There are many other types of frauds and schemes that cost the government money.

Why whistleblower claims are filed

Whistleblowers prove that not all heroes wear capes. When a person blows the whistle, he or she is taking a stand against fraud and corruption, and helping to ensure that our government, its agencies, and private and public companies follow the laws.

Because blowing the whistle can have determinantal effects on the person who comes forward, the laws generally also provide for a legal cause of action if an employer fires, fails to promote, or otherwise punishes an employee for disclosing the fraud.

Whistleblowers who are the first to disclose fraud may be entitled to a percentage of the recovery – usually somewhere between 10 and 30 percent. The reward provides the incentive for whistleblowers to step forward in addition to the desire to hold anyone accountable who is cheating the government.

Who can file a whistleblower claim?

Whistleblowers should consult with attorneys who have experience filing qui tam actions. There are specific criteria for disclosing the fraud that entitle the whistleblower to a percentage of the recovery. For example, the disclosure can’t involve something the government already knows. The disclosure has to be something that is useful to the Department of Justice or agency assigned to investigate the claim. Disclosing that your employer has a bad bedside manner won’t qualify you as a whistleblower.

What if the government ignores my complaint?

At Plattner Verderame P.C., we understand the need for whistleblowers to help the government. We also understand how scary and intimidating the process can be. It’s hard to step forward and say “my boss is a crook,” especially when you have bills to pay – and when the chances are good that people may be very, very angry. We guide whistleblowers through the legal process, work to protect their privacy, and fight to help them get an award. For help with a whistleblower claim, call our experienced Phoenix qui tam lawyers today at 602.783.8793 or fill out our contact form to make an appointment.