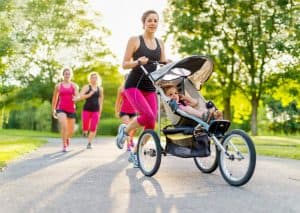 Britax Child Safety, the leading manufacturer of child safety products, allegedly failed to meet is deadline to notify consumers and resellers of a dangerous defect in its BOB jogging stroller. According to The Washington Post, Britax reached an agreement with the US Consumer Product Safety Commission (CPSC) to educate the public about a dangerous problem with the front wheel.

The consumer agency became involved after there were complaints that close to 100 children and parents had been injured between 2012 and 2018 due to a defect in the company’s BOB stroller: the front-wheel of the three-wheeled stroller could fall off. The agency sought to recall the BOB stroller. Britax claimed that its strollers were safe.

A settlement was reached in which CPSC agreed not to follow through with the recall, provided Britax sent notices to companies that sold the jogging strollers and to consumers about an online safety program in place to educate them about the problems with the front-wheel, and to how fix the danger. The program’s key tool is a video that explains how to properly attach the front wheel. Consumers were also to be given the option of a 20% discount on a new stroller.

Notices to the retailers and resellers were supposed to be received by January 10, 2019. The Washington Post reports that one group, the National Association of Resale Professionals, did receive its notice by email – three months late. However, both Goodwill and REI claimed to not have received notices, and neither Target nor Buy Buy Baby would comment to the paper.

Satisfying safety standards does not necessarily mean a product is safe. In the cases of the BOB strollers, safety standards only require that that the wheel not come off when you pull on it. It is much like the government safety standards for the roofs of cars: they cannot crush when the car is gently turned upside down during testing, but the tests are not the same as the dynamic impact of a car that Rolls and the roof slams into the ground. This is why a vehicle with a crushable roof is still considered “safe” on the road.

Product liability laws hold companies to a higher standard, because strollers are expected to carry infants and toddlers while being pushed by a running adult on imperfect surfaces at significant speeds. Car roofs should protect drivers and passengers in the event of a catastrophic crash. If a stroller wheel, car roof, or any product is defective, and that defect causes injuries to anyone, then a product liability lawsuit can be filed against the manufacturer, and (potentially) the sellers of the product, too.

In Arizona, you can make a claim for damages if you have been injured by a defective product. You can be compensated for your:

Understand that companies that are in business to make money by selling products generally fight hard to keep that money, even when their products are dangerous and defective and hurt people. That is why hiring a Phoenix product liability lawyer is in your best interest. You only have two years to file a claim, so give us a call today. We can talk about what your options are.

At Plattner Verderame, P.C., we have the experience and resources to help prove that a defective product was the cause of your injuries. To schedule a free consultation, please call our Phoenix office today at 602-266-2002 or fill out our contact form. We are proud to represent clients throughout Arizona.