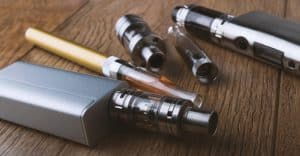 For the last few years, e-cigarettes have become the go-to product for people trying to quit smoking. While no one debates the dangers associated with traditional tobacco products (lung cancer, COPD, mouth and throat cancer, heart disease – the list goes on and on), there is a fierce debate over whether or not “vaping” is healthier for you.

But e-cigs pose another danger, too: namely, that their batteries can explode. CNN recently posted this video of a man whose e-cigarette caught fire while it was in his pocket. In it, you can see the flash of the flames, and the man rolling around on the floor. The newscaster reports that manufacturers of e-cigs say that there have been “only a few accidents” involving their products.

That’s not actually true, though.

In July of 2017, the U.S. Fire Administration published a report titled “Electronic Cigarette Fires and Explosions in the United States, 2009 – 2016.” They reviewed close to 200 separate incidents involving exploding e-cigs. Over that time, 133 reports of acute injuries were recorded, all to individuals (as opposed to multiple people sustaining injuries from one explosion). Of those incidents:

Why do the batteries in e-cigs lead to fires?

E-cigarettes use lithium-ion batteries. If that type of battery sounds familiar, it should: they’re used in hoverboards and Samsung’s Galaxy Note 7 – two products also know for exploding. Lithium-ion batteries are among the most effective batteries in common use, but they are also dangerous. Wired explains it this way:

“Inside, the main line of defense against short circuiting is a thin and porous slip of polypropylene that keeps the electrodes from touching. If that separator is breached, the electrodes come in contact, and things get very hot very quickly. The batteries are also filled with a flammable electrolyte, one that can combust when it heats up, then really get going once oxygen hits it. Not scary enough? That liquid is mixed with a compound that can burn your skin.”

Now, think about the size of the battery in the average e-cig. It’s tiny. That means that everything in the battery needs to be sized to fit, and produced at a cost that people are willing to pay. If there’s a defect in the protective shield, or a design flaw in the way the battery is constructed, or if some particle of dust somehow manages to interfere with the components, you could easily end up with an exploding e-cigarette in your pocket or in your home.

We applaud anyone who wants to quit smoking – we just don’t want to see you get hurt in the process. E-cigarettes are still an untested technology when it comes to health concerns, and the risk of being burned is real. We want you to have the facts before you purchase one of these products.

Plattner Verderame P.C. has been offering honest, practical counsel to injury victims throughout Arizona since 1981. If you think your burn injuries may have been caused by a defect in your e-cig, come see us; we may be able to help. Please call 602-266-2002, or complete our contact form to set up your free consultation at our office in Phoenix.