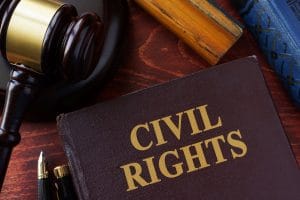 Section 1983 is part of the Civil Rights Act of 1871 (42 U.S.C. § 1983), which gives victims a cause of action for filing a lawsuit for civil rights violations such as police misconduct and excessive force., Congress passed the Civil Rights Act to guard against the racial injustice and violence taking place after the Civil War ended. Section 1983 claims allow citizens to file a civil lawsuit when their Constitutional rights have been violated.

“Every person who, under color of any statute, ordinance, regulation, custom, or usage, of any State or Territory or the District of Columbia, subjects, or causes to be subjected, any citizen of the United States or other person within the jurisdiction thereof to the deprivation of any rights, privileges, or immunities secured by the Constitution and laws, shall be liable to the party injured in an action at law, suit in equity, or other proper proceeding for redress.”

A plaintiff must prove that the offending conduct occurred under color of state law, and that this conduct deprived the plaintiff of the rights, privileges or immunities guaranteed under federal law or the U.S. Constitution. A Section 1983 claim is complicated, but if you believe that your Constitutional rights have been violated by any government agent acting in their official capacity on behalf of a state government, you may be able to seek justice and compensation for the actions of the agent.

In May 2019, a Phoenix family was terrorized by Phoenix police over what came down to the shoplifting of a doll from a local dollar store by a four-year-old girl. Part of the incident was captured on cell phone video, but what occurred prior to when filming began is unclear.

A story in AZCentral reports that the incident began with a call from the dollar store reporting that the child stole a doll and that the family was driving away. When the vehicle with the child, her parents and younger sibling pulled into a parking lot, a police officer, who was allegedly not running lights and sirens, stopped them. The police officer banged on the car window with a gun, allegedly threatening to shoot the family in their faces, and told them to get out of the vehicle. One of the videos show the police officers yelling and cursing at the couple, threating to shoot them. (The couple never resists the officers.) The father was pulled from the vehicle, was pushed face down on the pavement and handcuffed. The officer kicked the father in the leg and punched him in the back. One of the officers tried to grab the one-year-old from her mother’s arms so that he could place the mother in custody and injured the baby’s arm.

The parents were held in the back of a police car and questioned. When a lieutenant arrived at the scene and defused the confrontation, the parents were released without being charged in connection with the incident.

Later, according to a story in the New York Times, Kate Gallego, Mayor of Phoenix, apologized to the family. The mayor said that she felt “sick” over what she had seen in the videos. “It was completely inappropriate and clearly unprofessional,” and “there is no situation in which this behavior is ever close to acceptable. As a mother myself, seeing those children placed in such a terrifying situation is beyond upsetting.” A family spokesperson called the apologies issued by the mayor and by the chief of police “a sham, and lacking all substance.”

Legal filings in the case published in the AZCentral article accuse the officers of committing battery, unlawful imprisonment, false arrest, infliction of emotional distress, and violation of civil rights under the 5th and 14th amendments of the United States Constitution pursuant to 42 U.S.C. 1983.

The couple has filed a $10 million lawsuit against the city of Phoenix for excessive force and the shooting threats.

Phoenix has a police “misconduct” problem

In another story, the Times reports that Phoenix had 44 police shootings las year, which was far more than any other city of its size.

The incident we described is a clear example of the excessive use of force against a young family whose little girl walked out of a store with a doll. The dollar store didn’t even press charges, because who wants to criminally charge a four-year-old – a child who almost certainly did not and could not understand why her actions were “wrong”?

Yet this story is not an outlier. A recent investigation by The Arizona Republic found that the Phoenix Police Department has erased at least 600 acts of misconduct from its records over a five year span, including acts of excessive force. Per the report:

“The practice, which the Department refers to as ‘purging,’ has been standard for more than two decades under the police union’s contract, but the public has been unaware of it.

The contract also prohibits misconduct detailed in the purged records from being considered in future disciplinary investigations or performance evaluations.

Of the Phoenix Police Department’s nearly 3,000 sworn employees, 525 have purged disciplinary records, according to The Republic investigation. The number includes sergeants and lieutenants who supervise officers and investigate allegations of misconduct lodged against them.”

Until we can get to the root of what is leading our law enforcement officers to threaten and then perpetrate violence against our citizens, and why this behavior is so often allowed to be erased from their records, we fear that Section 1983 claims will become the norm, not the exception.

If you believe that your civil rights have been violated by an agent of the state, the trusted Phoenix police brutality attorneys at Plattner Verderame, P.C. are here to represent you.

Plattner Verderame, P.C. is a Phoenix-based injury law firm serving clients throughout Arizona and protecting your civil rights. You may speak with an experienced attorney about your case by calling 602-266-2002 or filling out our contact form.