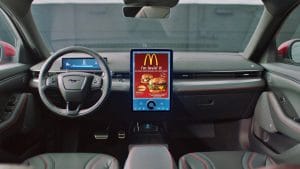 According to Jalopnik, Ford’s new detection system may have some good intentions, but its execution of that intent is extremely dangerous. Ford’s intent is based on the difficulty drivers and passengers have in reading all the information on a billboard sign. Most people can read the headline. There’s simply no way though that even drivers with perfect vision and great recall can read all the details when they’re also focusing on traffic and they’re traveling down the highway at 60 mph. The details include addresses, phone numbers, emails, website URLs, directions, and other bits of data.

How do the billboard detector systems work?

The streaming of ads poses another concern that complements the driver distraction concern. As ads proliferate in the vehicles we drive, consumers may be forced to pay a premium just to have an ad-free driving experience – in the same way consumers pay for ad-free social media sites. You may need to pay $30 a month not to be bombarded with billboard information as your car travels down the highway. You can also imagine that when you stop to fill up your gas tank or charge your car’s batteries that as soon as you drive into the station, the station starts broadcasting ads because the stations recognize a human or a car. The so-called “rest” stop now will be another noisy experience.

Why the new Ford in-car advertising experience is especially dangerous

Most of the forms of driver distraction are within the control of the driver. A driver can choose not to eat, drink, talk on his/her cellphone, or text while driving. With in-car advertising technology, the driver isn’t in control. Drivers don’t know when a billboard will pop up. Most drivers need to have their infotainment systems turned on during the entire trip to take advantage of the infotainment’s systems other functions.

Screens are also especially distracting because it’s natural to focus on graphics that are right in front of our eyes. Drivers who have eye disorders may be immediately distracted by any flash of light. Just the change from nothing on your screen to something on your screen means your eyes will be diverted from the traffic around you to the screen.

When cars are fully autonomous and self-driving, then visual stimulation may have its benefits. Since self-driving vehicles are still years if not decades away, Ford’s new in-car-advertising technology seems reckless and dangerous. It’s likely to cause many fatalities and serious injuries.

Why distracted driving is dangerous

Data from the Centers for Disease Control and Prevention (CDC) confirms that nearly eight people a day die due to distracted drivers. Distracted driving is dangerous in three fundamental ways:

What are the common types of driver distraction?

Driving while tired and driving while under the influence of alcohol or drugs are also forms of distracted driving.

At Plattner Verderame, P.C., we are experienced car accident lawyers. We file claims against drivers who cause car accidents for any reason including driver distraction. We also file claims against car manufacturers for their negligence and if their products are defective. We demand compensation for your physical pain, emotional suffering, medical expenses, lost income, property damage, and any other damages the law permits. To speak with a seasoned car accident attorney at our Phoenix or Tempe office, call us at 602.266.2002 or complete our contact form to arrange a time to speak with our office.