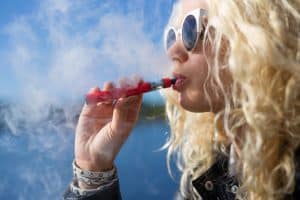 Electronic cigarettes have been marketed as a product that can help adults who are trying to quit smoking traditional cigarettes. However, with their dessert-flavored liquids and their ease of use, Juul has become wildly popular with children and teens. For this reason, they pose a unique danger to underage vapers.

Juul is a specific type of e-cigarette that resembles a USB flash drive. These devices are small, easily concealed, and might not be recognized as a vaping device to an unsuspecting parent.

The liquid nicotine is delivered in a pod. The e-cigarette heats the nicotine pod and the user inhales the vapors. The colorful pods, which used to contain flavorings such as mango, fruit, creme and cucumber, were meant to be “effective tools to help adult smokers switch from combustible cigarettes” (per the company itself), but what those flavorings were doing was appealing to kids.

According to an article in Tobacco Control, Juul went from a little-known brand when it launched in 2015 to the largest e-cigarette brand in the United States by 2017. Juul’s fourth quarter 2017 retail sales of $150 million accounted for about 40% of the e-cigarette retail market share, largely fueled by engaging and wide-reaching social media campaigns on Twitter, Instagram and YouTube.

The practice of Juuling is simply smoking Juul e-cigarettes. A quick search on YouTube will yield countless videos with instructions on how to Juul in class or at home without getting caught, and millions of kids—high school and middle school age—are already addicted to vaping e-cigarettes, with Juul being far and away the most popular brand with kids.

Is Juul marketing e-cigs to kids?

At the end of 2018, after much criticism about their marketing tactics which blatantly appealed to teens, Juul launched a plan to combat underage use of their product. Juul stopped sending their flavored pods to the 90,000 retail locations that sell their products, and now they are only available for sale on the Juul website, which uses age-verification measures to make sure that they are sold to customers age 21 and older. This is a move one might describe as closing the barn door after the horse has already escaped.

At the end of 2018, Altria – the parent company of Philip Morris, the leading cigarette manufacturer in the United States – bought a 35% stake in Juul, given that sales of traditional cigarettes are declining in the U.S. Altria, in buying a piece of one of their competitors, is attempting to go where the customer base is going, given the sharp increase in the use of e-cigarettes.

The Center for Research reports that the amount of nicotine in one Juul pod is equivalent to a pack of cigarettes. While the FDA was given the authority to regulate e-cigarettes in 2016, they have allowed e-cigarette manufacturers to postpone their FDA applications for approval until 2022. In the interim, these devices, which are likely increasing cancer risk, are allowed to be unregulated and sold to kids.

Dangerous chemicals are used in the flavoring

E-cigarettes come in a variety of sweet flavors, and Juul is no exception. Those flavors, however, pose additional risks. In a recent study by the Harvard T.H. Chan School of Public Health, researchers found:

In addition, the researchers found that even low levels of both chemicals affected gene expression, suggesting that current standards for safe limits of exposure to these chemicals for workers may not be sufficient.”

The Harvard is study is not the only one to question the dangers of the chemical flavoring. In 2018, researchers from the Boston University School of Medicine found that the flavored liquids in e-cigarettes “may damage cells in the blood vessels and heart even when they don’t contain nicotine.”

More kids are vaping, and they are vaping more often

A National Institutes of Health survey reports that the number of high school seniors who report having vaped nicotine in the past 30 days doubled since 2017, from 11% to 21%.

The number of 12th graders who report having used any type of e-cigarette in the last 30 days was 27%, compared to the less than 5% of adults who currently use e-cigarettes.

The United States Surgeon General Dr. Jerome Adams issued an advisory in December 2018 urging new restrictions including taxes and indoor bans on vaping to curb underage e-cigarette use. A public health professor at Johns Hopkins University said, “e-cigarettes are leading millions of youth into nicotine addiction and placing them at unacceptable risk of harm.” A story in USA Today reports that about 3.6 million middle school, high school and college teens now use e-cigarettes.

The U.S. Centers for Disease Control and Prevention (CDC) reports that the use of tobacco products in any form is unsafe for young people. According to the CDC, if cigarette smoking continues at its current rate among young people in the U.S., 5.6 million of today’s Americans under age 18 will die early from a smoking-related illness, which works out to about one of every 13 Americans under age 17 who are alive today. The CDC is focused on preventing tobacco use in adolescents and children in any form.

What are the dangers of Juul e-cigarettes for kids?

Juul is a nicotine delivery device. The developing brain does not need to be bathed in nicotine and other substances, some of which are carcinogens. Here are just a few of the reasons kids should not be using Jull e-cigarettes from the MD Anderson Cancer Center:

The sleek design of the device, the ease of concealing it, the stealth quality of the device and the high amount of nicotine makes it easy for kids to hide them in plain sight from their unsuspecting parents and quickly become addicted.

There is a popular belief that e-cigarettes are a safer alternative to traditional cigarettes, however the American Chemical Society (ACS) researchers presented the results of a study on how e-cigarettes impact DNA. One of the researchers, Romel Dator, said “E-cigarettes are a popular trend, but the long-term health effects are unknown.” The researchers found that long term risks of e-cigarette use include an increase cancer risk as oral cell DNA may be modified with long-term use. Increased levels of DNA damaging compounds included: formaldehyde acrolein and methylglyoxal. Silvia Balbo, the project’s lead investigator said, “We still don’t know exactly what these e-cigarette devices are doing and what kinds of effects they may have on health, but our findings suggest that a closer look is warranted.”

Juul Labs is facing lawsuits claiming that their products were deceptively being marketed to underage smokers. The FDA now must create the enforcement policies to for e-cigarette manufacturers such as Juul, which have marketed their product to children and teenagers.

There are individual lawsuits against Juul, and at least one class action which include 10 named plaintiffs according to a story in the Washington Post. The lawsuits allege that Juul’s advertising campaigns were targeting young people who are under the legal smoking age. High school kids are quickly becoming addictive to the nicotine pods which contain as much as 5% nicotine as compared to the 1.7% limit in Europe.

The CDC has published a free tip sheet on how to talk to your kids about e-cigarettes.

Parents of young people who are addicted to Juul e-cigarettes and concerned about the undisclosed cancer risk, if you were injured when a Juul exploded you may have grounds for a defective product lawsuit. A Phoenix product liability lawyer from Plattner Verderame, P.C. is ready to represent you today.

At Plattner Verderame, P.C., we offer trusted legal representation for our clients that is also affordable. You are welcome to call us at 602-266-2002, or fill out our contact from, to learn how our experienced defective product lawyers can assist with your case. We proudly represent clients throughout Arizona.