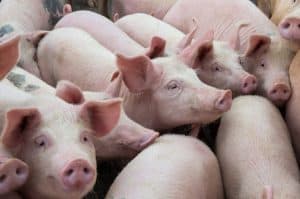 Back in June, a jury in North Carolina awarded a $50 million verdict in a nuisance case filed by 10 plaintiffs against Murphy-Brown, which is owned by Smithfield. At the time, we said that Smithfield should be worried, because the award could set a precedent.

Two months later, another federal jury in North Carolina decided “that Smithfield Foods owes compensation to six neighbors who complained in their lawsuit that the company failed to stop ‘the obnoxious, recurrent odors and other causes of nuisance’ resulting from closely packed hogs, which “generate many times more sewage than entire towns.” The jury awarded $23.5 million in compensatory damages, and $450 million in punitive damages.

Under state law, that $450 will be reduced to $94 million – but that’s almost beside the point. Companies like Smithfield have essentially bought and paid for states where pig farming is a crucial source of income. North Carolina has even passed legislation that protects the industrial farmers at the expense of its constituents’ health, livelihood, and ability to live normal, everyday lives.

Smithfield keeps its hog waste in open, anaerobic pits. When those pits are filled, you have to get rid of that waste somehow, and the most popular – and inexpensive – method used to be simply spraying the liquid feces all over the farm. Because the lagoons would overflow during storms, the excrement would spread, and contaminate the ground water and wetlands that are native to North Carolina. The real crux, however, was not the environment; it was the fear that Pinehurst would lose out on hosting the U.S. Open in 1999, because no one would want to play that close to one of the lagoons. Between the potential loss of revenue, and protests held by local activists, North Carolina banned the practice for industrial farms in 1997.

But according to CBS News, “Smithfield has continued using the low-cost method because it helps the company produce pork for less than in China, lawyers for the neighbors said.”

In short, Smithfield ignored the law and dumped massive amounts of manure on open fields. To add insult to injury, “Smithfield hasn’t taken measures that would minimize the nuisances, for example by sending trucks along a back road to pick up hogs for slaughter in the middle of the night instead of rumbling past sleeping homes. Nor has the company covered the waste pits or otherwise tried to capture the smell and bacteria resulting from pooling liquefied waste.”

What are nuisance lawsuits?

There is a lot of misinformation out there about nuisance lawsuits. You cannot just file a lawsuit because you don’t like the color of your neighbor’s house, or because their teenagers are loud at night. Under AZ Rev Stat § 13-2917 (2016), in order to have a claim, you must prove that actions are “injurious to health, indecent, offensive to the senses or an obstruction to the free use of property that interferes with the comfortable enjoyment of life or property by an entire community or neighborhood or by a considerable number of persons.”

The chicken farm that doesn’t properly dispose of its waste and chemicals, allowing them to leach into the water supply? A nuisance.

The township that allows buildings to fall into disrepair, putting pedestrians at-risk because of falling debris and scavenging wildlife? A nuisance.

That new movie theater with the spotlights that shine until 3:00 am every day, making it impossible for the entire neighborhood to block out the lights? A nuisance.

A multi-billion-dollar global company whose practices have turned your town into a biblical nightmare, with flies and scavengers everywhere?

Why the jury found for the plaintiffs

Technically, in this instance, Smithfield became a legal nuisance when they violated the law. But at its heart, this case was about accountability. Smithfield wasn’t responsible in any way to the law, the community, or public safety. The broke the law to save money – community be damned.

Global corporations and conglomerates like Smithfield Foods have gotten away with doing whatever they wanted, however they wanted to do it, for years. North Carolina actually passed legislation to protect the industrial hog farmers. Having open-air pits of excrement doesn’t help anyone in North Carolina. It doesn’t protect the air, the water, the soil – it protects Smithfield’s bottom line. Why wouldn’t they continue to flout the law? After all, no one ever called them to task for it before, and it’s not as though this is a new issue.

The company’s lawyers tried to paint this latest case as potentially destructive to the overall public good, with literally no sense of irony at all. They claim it is a “slippery slope that threatens the very existence of agribusiness of every form.”

They’re wrong. This was a victory for people pursuing their Constitutional rights to life, liberty and the pursuit of happiness. Pig waste smells like rotting corpses, thanks to a compound called cadaverine. Between the excrement and whatever is bubbling up form the anaerobic wells, that odor gets into your clothes, your furniture, your car seats. You can’t have your friends over for a barbeque. You can’t play in the family pool. You can’t walk the dog or work in your garden; you can’t even open the windows. There is no respite.

And that, we believe, is why a federal jury issued a $473.5 million award to the plaintiffs in this latest case. Because sometimes, the only thing that gets a corporation to stop its practices is to speak directly to its wallet. This jury is holding Smithfield accountable for breaking the laws, and for taking away the plaintiffs’ rights to a good life in the process. We applaud them for it.

At Plattner Verderame, P.C., we handle nuisance claims on behalf of clients in Phoenix and around Arizona. We understand exactly what kind of life is being taken from you by corporations who put their profits before people. We want to help. Contact our attorneys or call us at 602-266-2002, and schedule your free consultation today.