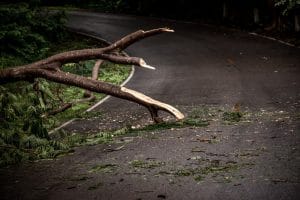 Mandy Poff had one of the scariest encounters anyone can experience on the road. While driving on State Route 51 in Phoenix, Arizona, she was traveling behind a pickup truck with an attached trailer when her car was struck by a metal pole. According to the Arizona Department of Public Safety, the pickup truck struck a bump in the road, causing the metal pole to escape from the trailer and impale Poff’s windshield.

The metal pole, which was four feet long, bounced on the road and flipped up straight through the windshield. Photos taken by the Arizona Department of Public Safety displayed the major damage done to the windshield and how the pole was lodged in the backseat of the car.

The very good news is that Ms. Poff is both alive and physically unscathed, though she did tell Fox 10 Phoenix that she’s still suffering as a result of the incident. Road debris incidents like this one – where a piece of debris goes through a windshield  – are more common than you might realize. In January, a realtor from Phoenix was injured on the Loop 101 when a piece if scrap metal kicked up from the road and crashed through his windshield. The driver told AZ Family “When it went through the windshield, it hit me first in the shoulder, then the other edge cut my right ear lobe in half.” He was lucky to survive.

Car accidents resulting from road debris are potentially life-threatening. Today, we want to talk a bit about what a road debris crash is, and what you should know.

What is considered road debris?

Road debris is exactly what you think it is: objects and detritus in the road that can cause a driver harm. The more common examples include:

Why is road debris so dangerous for drivers?

On roadways where vehicles and commercial trucks are already traveling at high speeds, the sudden appearance of road debris can create dangerous driving conditions for all motorists. According to the Arizona Department of Public Safety, there are about 1,000 traffic accidents each year as a result of road debris. These crashes occur not only because the vehicles collide with the road debris but because the drivers may engage in dangerous behavior such as swerving to avoid colliding with the garbage or suddenly braking to avoid a collision. As a result, drivers can lose control of the vehicle and crash into other motorists, or cause other motorists to crash into them.

How does poor vehicle maintenance lead to road debris?

When drivers fail to maintain their vehicles, the chances of car parts breaking down and falling into the roadway increase. This is especially true for 18-wheelers, whose blown tires we see all over highways in Arizona. It is also not uncommon to see mufflers, side-view mirrors, and other parts of cars and trucks along the road.

Improperly secured cargo sends debris all over the road

Commercial trucks and larger vehicles are used to transport heavier loads of equipment, materials, goods, and even garbage across many roadways. When that equipment is not properly stored, truck drivers contribute to the likelihood of a potential road debris accident. Failure to properly tie down cargo or secure loads can produce many hazards on the roadway for the motorists following behind the truck and for the truck driver. (It can also shift while in transit, affecting the balance of the truck and increasing the risk of a rollover.)

The cargo can fall off the truck and, depending on other factors, can strike a vehicle with a massive impact. When the metal pole struck through Mandy Poff’s windshield, she compared it to a missile being launched at her face. Imagine the type of damage that other forms of cargo can cause to vehicles and drivers just by the sheer force of impact.

Who is liable for road debris accidents?

One of the biggest challenges with road debris accidents is can be difficult to establish liability. Generally, any driver whose cargo has fallen onto the roadway and was deemed responsible for initiating a traffic accident can and should be held liable for any damage caused in the accident. The issue, however, is proving where it came from in the first place. In many cases, the vehicle that was at fault for the accident has already left the scene of the accident and is not identifiable. In many cases, multiple vehicles are involved, which means multiple insurance companies are all pointing their fingers at one another to avoid having to pay out.

With Mandy’s accident in Arizona, the alleged driver of the pickup truck continued to drive off and did not remain even after the incident happened. As of July 23, the driver still has not been identified. These types of challenges make the means to establish liability difficult.

How can truckers and drivers prevent road debris crashes?

For drivers who carry and transport cargo on the roadways, the best way to prevent a road debris accident is to make sure all of the cargo in your vehicle is properly secure before traveling on the road. It does not hurt to double-check that all objects are properly secured in the proper places. For drivers who find themselves in the unlucky position of being involved in road debris accidents, there are several actions that can help drivers avoid any potential hazards:

Of course, if all cars came equipped standard with crash avoidance technology – something our Phoenix car accident attorneys have been advocating for from the start –it might make the roads a little safer.

At Plattner Verderame, PC, we represent victims of road debris car accidents in Phoenix and Tempe. Call our office at 602-266-2002 or complete a contact form to schedule a free consultation today.