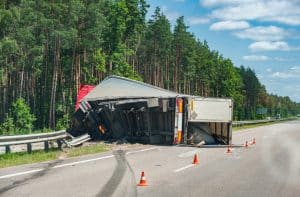 Truck accidents are much more likely to cause deaths than car accidents for many reasons. Trucks are simply much bigger, longer, wider, taller, and heavier than cars. When a truck strikes another car, the odds are high that the car will be crushed, causing fatal injuries to the occupants. The drivers and passengers in small cars that slide under trucks also have little chance of survival. Wide-turn accidents, truck jackknifes, tire blowouts, and truck rollover accidents are also extremely dangerous. Spilled cargo, driver fatigue, driver intoxication, and speeding are common causes of these types of traffic fatalities.

A recent Freightwaves article disclosed that the current commercial truck safety trends are going in the wrong direction. Fatalities from truck accidents in 2021 increased by a frightening 13 percent. The rate of truck-related fatalities in 2021 is the highest it’s been since 2005. The rise in traffic deaths reverses what seemed like a promising trend of fewer deaths prior to 2021.

The data from the National Highway Traffic Safety Administration (NHTSA) examined deaths where at least one heavy vehicle (a vehicle with a gross vehicle weight rating was more than 10,000 pounds) was involved in an accident. The total number of deaths jumped from 4,965 in 2020 to 5,601 in 2021 nationwide.

According to the NHTSA, the 2021 estimate involves commercial and non-commercial trucks. The number of reported deaths may change as the data is further examined. The NHTSA estimates that nearly 43,000 people died in motor vehicle crashes in 2021. That number is about a 10% increase from 2020.

According to NHTSA Deputy Secretary Steven Cliff, everyone needs to contribute to an increase in safety efforts to bring down the number of fatalities. Everyone includes the state and local governments, automakers, and drivers. One of the most dramatic changes was the increase in deaths on urban roads which, when using March as an example, increased by 57% from 2020 to 2021 and 16% for the full year.

The number of truck-related fatalities across the country increased by 52% from 2010 to 2021. Per Freightwaves, the Truck Safety Coalition expressed concern that even though passenger vehicles are designed for safety, 97% of the deaths when a car and a large truck collided were the occupants of the passenger vehicles. The Truck Safety Coalition recommends that regulators review various safety features include:

Ariel Wolf, general counsel for the Autonomous Vehicle Industry Association said that NHTSA’s 2021 fatality data is “the most sobering crash report since the inception of the traffic fatality tracking system in 1975.” The AVIA includes autonomous truck companies such as Embar, TuSimple (which has a facility in Arizona), and Aurora. Wolf said the spike in 2021 deaths and an increase in “risky driving behaviors” is a reminder why his industry is “dedicated to developing and deploying lifesaving technology.”

In Arizona, ARS 12-612 states that wrongful death claims are owned by the person bringing it – parent, spouse, or child. If the estate brings the claim, it’s only for the medical bills. If the family brings the claim, they can seek damages for funeral and burial expenses; the loss of financial income due to a loved one’s death; the emotional suffering and shock of the death, and the loss of love, companionship, support, and guidance a loved one would have provided each beneficiary.

At Plattner Verderame, P.C., our Phoenix truck accident lawyers have been fighting for personal injury victims and families of loved ones who tragically die due to accidents for more than 30 years. We understand the unique challenges involved in filing a claim when a loved one dies, including how to present the evidence about the accident when your loved one isn’t there to testify. We’ll help you honor your loved one by fighting to obtain the maximum amount of compensation the law permits. To discuss your claims, call our offices in Phoenix or Tempe or fill out our contact form to schedule a free consultation. We’re on your side during this difficult time.