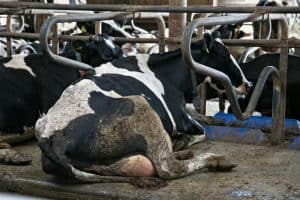 Livestock, in a word, smells. Large-scale livestock operations, however, create more than just an unpleasant odor; they produce toxic waste; bring flies, pest, and rodents; and pollute the air in ways that can exacerbate people’s medical conditions, or create new ones.

The Environmental Protection Agency (EPA) admitted in a September 2017 report that they had not found a reliable way to track emissions from animal farming, per reporting done by Mother Jones, and they had no way to ascertain whether these farms are complying with the Clean Air Act.

That is why there was a rule that was scheduled to go into effect in November 2017, which would require factory farms, or concentrated animal feeding operations (CAFOs), to report their hazardous chemical emissions to the EPA. Before leaving office, the Bush administration exempted CAFOs from the requirement to report their emissions of chemicals such as hydrogen sulfide and ammonia. Environmental groups sued, and the U.S. District Court of Appeals for the District of Columbia ended the factory farm emissions reporting requirement.

It was supposed to help people.

In December of 2018, the EPA motioned to delay the reporting requirements until January 2018. Then the Trump administration and Congress exempted the CAFOs from the emissions reporting requirement altogether. In response, a coalition of environmental advocacy groups – including Food & Water Watch, the Humane Society, Animal Legal Defense Fund, and North Carolina’s Rural Empowerment Association for Community Help – is suing the EPA, according to an article in The New Food Economy.

The emissions reporting rules, which would have fallen under the Comprehensive Environmental Response, Compensation and Liability Act of 1980 (CERCLA) and the Emergency Planning and Community Right to Know Act of 1986 (EPCRA), would have required farmers to notify the EPA whenever they released more than 100 pounds of ammonia in a single day. They would have also had to alert the EPA when they released an extra amount of any other hazardous substances. (You can read the ruling in full here.)

This is a serious health concern

The New Food Economy article quotes Judge Stephen F. Williams, who wrote the opinion for the case: “That risk isn’t just theoretical; people have become seriously ill and even died as a result of pit agitation.”

What is pit agitation, you ask? Large, concentrated animal farming operations amass huge pits of animal waste. The waste is pumped into pits where it decomposes and ferments the waste. Pit agitation occurs when the deeper levels of fermented waste gets disturbed and emits concentrated amounts of toxic gases into the air. According to the American Society for the Prevention of Cruelty to Animals (ASPCA), reports that 9 billion or more animals are raised on factory farms each year in the U.S., and factory farms generate 400 types of toxic gases and 300 million tons of manure. Industrial animal agriculture creates more greenhouse gases than all the world’s transportation combined.

People’s lives are being ruined

The Mother Jones piece details how the people who live near these farms are concerned that their health is at risk from breathing the toxic chemicals being emitted from these animal farming operations. These people don’t want to leave their land and communities because of the factory farms in the area, but at the same time they are concerned for their health.

“We’re going to stay here until we can’t anymore,” said Iowa homeowner Rosemary Partridge. “We love our land. There’s no reason that an industry should drive us off our land.” But as she also pointed out, “These are major greenhouse gases. People don’t even know about it.”

So, the stench and the flies and the pollution in the air and water caused by factory farms continues. People continue to suffer, and the laws continue to be ignored or rewritten to protect factory farms, and not the people who live on the land.

At Plattner Verderame, P.C., we have seen first-hand how these factory farms make life unbearable for people in Arizona and throughout the country. That is why we are proud to represent landowners who wish to file nuisance lawsuits against large-scale operations that have made it impossible for our clients to maintain their own rights to life, liberty and the pursuit of happiness.

If you have questions about a potential nuisance lawsuit in Arizona, or wish to discuss your legal options with an attorney, please fill out our contact form or call us at 602-266-2002. We provide honest, practical guidance for clients in Phoenix and throughout Arizona. Let us help you, too.