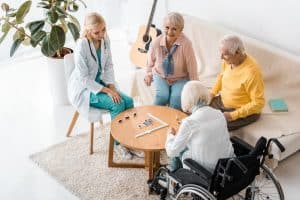 USA Today reported in May 2018 that bullying is all too common at nursing homes. Seniors, their children, and friends and family have the right to expect that seniors will be respected and protected during their residency. Patients should be aware that they have a Bill of Rights that protects them from various forms of physical, emotional, sexual, and financial abuse from the nursing home managers and staff.

Unfortunately, too many nursing homes are finding the need to manage another problem. Just in the old days of grade schools, some seniors find the need to intimidate and bully other senior residents.

The USA Today story profiled some of the abuses at one San Francisco, California nursing home. There “the unwanted were turned away from cafeteria tables. Fistfights broke out at karaoke. Dances became breeding grounds for gossip and cruelty.”

The San Francisco center is addressing the problem, as many nursing home and senior care centers should, by getting help to create anti-bullying programs. The programs include:

According to Robin Bonfias, an Arizona State University social worker, about 20% of seniors in nursing homes are subject to bullying. Part of the problem is due to difficulties dealing with getting older and part of the problem is due to the nature of communal settings. For example, she says that bullying is a way of showing control, an attribute many seniors find is fading away as they age.

Bullying includes intimidation, spreading gossip, and “picking on people.” Senior bullying tends to be more emotional bullying than physical bullying. According to a woman who manages a Pittsburgh bullying consultancy, many of the bullies are women – in part due to the fact that women tend to outnumber men at many facilities.

The bullying at senior centers has sparked more than just programs. The National Center for Assisted Living has begun a campaign to educate the public about the dangers of senior bullying. The Human Rights commission in St. Louis Park, Minnesota shows, through public service announcements, a man becoming the subject of gossip when he is prevented from playing in a card game.

Other examples of senior bullying include a woman who tried to control where people could park, fighting over priority in the laundry room. Bingo-contests can become quite contentious. LGBTQ issues often escalate into bullying acts against the non-heterosexual.

At Plattner Verderame, P.C., we understand how important it is for seniors to feel safe and comfortable. When nursing homes fail to protect seniors from harm or fail to take steps to reduce the risk of harm, our Phoenix nursing home lawyers work to hold the facilities liable. For help for an Arizona nursing home resident in need, call us today at 602-266-2002 or use our contact form  to schedule an appointment.