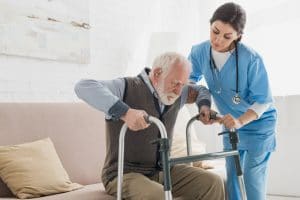 Nursing homes and residential care facilities are responsible for the employees they hire. Part of that responsibility is running a criminal background check, to ensure that the new hires are eligible to work in the nursing home. Failure to do so puts residents at risk. It also opens the nursing home to liability.

A family in Kansas has filed a wrongful death lawsuit against Mapleton Assisted Living, after learning that their loved one – who suffered from frontal lobe dementia – was repeatedly raped by an employee. The facility kept perpetrator, Muhammad Q. Akram, on staff for six months without completing the background check. Per The Wichita Eagle, the screening:

would have turned up severe-enough issues likely to disqualify him from working around vulnerable patients. Those include a 2005 rape allegation that was reported to police but never prosecuted; a sexual battery conviction that resulted from a 2006 report where the victim said Akram tried to buy her silence with pills; a 2008 decision by the Kansas Board of Healing Arts to restrict Akram’s solo contact with female patients following sexual misconduct allegations; and an 18-month federal prison sentence handed down in 2011 after he pleaded guilty in a food stamp fraud case, according to the lawsuit.

The lawsuit also alleges that Mapleton staff actively discouraged the victim’s family from pursuing a sexual assault exam, even going as far as to convince local police not to send the rape kit to the FBI. In the end, Kansas’ aging and disability services department ended up pursing its own investigation and pushing through analysis of the exam. Per the family’s attorney, “there was no autopsy performed but said in the suit that a ‘contributing factor to her death was the brutal rape.’”

Senior assault and rape is a real and common occurrence

In an explosive 2017 report, CNN found “More than 16,000 complaints of sexual abuse have been reported since 2000 in long-term care facilities (which include both nursing homes and assisted living facilities), according to federal data housed by the Administration for Community Living.” These numbers are likely low, as they only included cases that were reported to states’ ombudsmen. Per CNN’s data, “the federal government has cited more than 1,000 nursing homes for mishandling or failing to prevent alleged cases of rape, sexual assault and sexual abuse at their facilities” between 2013 and 2016 alone, and that at least 500 nursing home facilities were cited for not investigating and reporting “allegations of sexual abuse thoroughly to authorities or for not properly screening employees for potentially abusive pasts.”

Yes and no. Moreover, a criminal record does not mean a person will be denied a job at a nursing home.

For years, decisions regarding employee background checks were left up to the individual states. That is still largely true. Even federal laws only mandate that the facilities be “thorough” in their investigations; they do not define what that means. Furthermore:

There are some specific regulations, though. Any nursing home that accepts Medicare or Medicaid is prohibited from hiring people who have been “found guilty of abusing, neglecting, or mistreating residents by a court of law, or who have had a finding entered into the State nurse aide registry concerning abuse, neglect, or mistreatment of residents or misappropriation of their property.” The Patient Protection and Affordable Care Act, signed in 2010, was supposed to address those loopholes, but in the end, they remain.

The truth is, working in these types of facilities as an administrator, aide, or other non-licensed job is not the most glamorous job, and the pay is often minimal. As such, there is a lot of turnover – and thorough background checks are expensive and time-consuming. To reduce those costs, the facilities often forgo the types of in-depth background checks that are necessary in lieu of basic identification verification, if they go that far at all.

How do we know? Because we’ve seen it happen before. Frank Verderame represented a woman who had been a model before was paralyzed in a vehicle crash, necessitating her move to a residential facility. She was raped by an orderly with a record of assaulting residents in nursing home facilities, because the facility she was in never did a background check on their employee. When Frank took the case, he worked with an investigator who discovered the orderly’s background, and he was able to secure an award for our client.

What kinds of background checks should nursing homes require?

There is more than one kind of background check, and healthcare workers – whether they’re medically licensed doctors and nurses, part-time administrative or janitorial staff, or even volunteers – should rigorously screened using as many of them as possible. According to one background screening company, healthcare workers may undergo any (or all) of the following background checks at the local, state and/or federal level:

By not taking proper steps when hiring, employers miss people with convictions, people who have been fired from previous jobs (and finding out why), and a host of other issues. And this matters – not because people who have been convicted of crimes don’t deserve second chances, but because people lie on applications in any industry. A potential employee who lies about a criminal record cannot be trusted because he or she lied. A person who has been fired from multiple facilities, or who suddenly “resigned” or “ghosted” an employer, is not someone who is inclined to take pride, or care, in the job. In our experience as nursing home neglect lawyers, we have found that careless employees are negligent or neglectful employees. These are the people whose patients develop bedsores and infections from dirty feeding tubes or poor hygiene, or because they are not regularly rotated in their beds. Their patients may suffer from malnutrition or dehydration, or be chemically restrained for convenience. Their medications are wrong, or given in the wrong dosage.

Failing to conduct thorough background checks puts residents’ lives in danger, not only from abusive employees, but from the ones who don’t care what happens to the people they’re tasked with feeding, clothing, and protecting.

Making a claim against a nursing home for negligence

Negligent hiring practices – like not running background checks, or knowingly hiring someone who is on the exclusion list – is one type of nursing home negligence. Improper supervision of employees is another. If a nursing home in Arizona has engaged in negligent or abusive behaviors, you can file a claim for damages against them if those behaviors result in the injury or death of your loved one. You can also file a report with Arizona’s Long-Term Care Ombudsman Program (602-542-6454), or with the Area Agency on Aging’s program for Maricopa County (602-264-2255).

If your loved one has been neglected or abused in a nursing home in Arizona, we have the experience and skills to help. If you live in Arizona but your loved one is living out-of-state, we can still help. Call the nursing home abuse attorneys of Plattner Verderame, P.C. at 602-266-2002, or complete our contact form and schedule a free consultation. We maintain offices in Phoenix and in Tempe to better serve you.