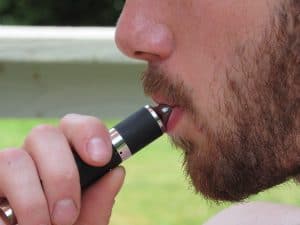 Vape pens and e-cigarettes are peaking in popularity right now. People trying to quit smoking cigarettes, or people who just like to have plumes of smoke around their heads are the target audience of vape manufacturers. Because these devices are so new, there isn’t a large body of research around health effects or even much product testing on the devices themselves.

On May 5, a 38-year-old Florida man was using his vape pen at home and the pen exploded, killing him and starting a fire. After an autopsy, reports CBS News, authorities found the force of the pen’s explosion was so great that it thrust several pieces of the vape pen directly into the man’s head. The fire that broke out also caused burns over 80 percent of the victim’s body by the time firefighters were able to get to him. Authorities believe the injuries to his head were too severe for him to have survived.

This is the first death attributed to vape pen/battery explosions.

The vape pen was designed and manufactured by a company called Smok-E Mountain. In a statement provided to CBS, a company representative said that their devices do not explode, and they believe the issue was either an atomizer or battery, noting that they have had problems with other companies cloning their batteries with inferior models.

The FDA is currently looking into the incident to see if this is a product liability or defective product issue. Currently their results are inconclusive and their only theory is that the explosion had something to do with the vape pen’s battery.

Keep in mind that exploding e-cigarettes and pens are rare, but it does happen from time to time, and most explosions center around the battery. There is enough concern that the FDA has issued a fact sheet with safety guidelines on using these devices:

More and more injury cases involving vape pens and e-cigs are popping up all over the country. Talk to the experienced Phoenix attorneys at Plattner Verderame, P.C. about your potential case as you may be entitled to compensation. Talk to our skilled legal team today by calling 602-266-2002 or filling out our contact form.