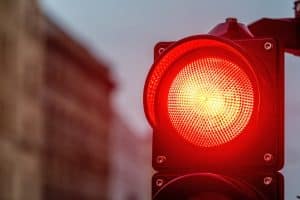 If you are involved in a traffic accident because someone runs a red light, you’d be forgiven for thinking that liability is easy to determine. After all – you were following the rules and someone else wasn’t, and now you’re hurt.

Unfortunately, determining who was the cause of your injuries can be complicated. There are many factors that go into figuring out who is responsible for the accident (it isn’t always who you think) and there’s a good chance that the other person’s lawyer is going to try to claim you bear some responsibility yourself.  This can be a serious concern, as the injuries sustained from crashes at an intersection can be brutal, especially if the person who crashed into you hit you at a high speed.

So if you are injured in a red light accident in Phoenix, the first thing you should do is call for help. Red light collisions tend to cause a lot of damage to vehicles, which means it may not be safe for you to exit your car, or to move it to the shoulder (provided, of course, you are able to do either). By calling 9-1-1, you can alert both the police and the local EMS that there was a crash and that you need help. You can also guarantee that there is a police report, which may help you later if you seek damages.

The next thing you should do if you are able is to take photos and videos of the scene. Get as many pictures of your vehicle (inside and out), the other car, and the road around the crash. You should also take photos of your injuries; a nurse or EMT can help with this if you cannot take them yourself.

Next up, get everyone’s contact information. The police officer who responds will often have one sheet of paper with a report number and everyone’s information; if you cannot get the information at the time of the accident, you can get it from the police later.

Finally, you should contact a Phoenix car accident lawyer. Insurance companies are notorious for not wanting to pay out claims. You’re going to want some help so you don’t end up losing out on compensation that you rightfully deserve.

What you should know about red light accidents

The Insurance Institute for Highway Safety (IIHS) reported that in 2020, there were 928 fatalities in accidents that involved red light running. Of those fatalities, half of them “were pedestrians, bicyclists and people in other vehicles who were hit by the red light runners.” In the same year, about 116,000 people were injured in red light running accidents. Clearly, this is a serious issue.

The IIHS goes on to describe: “In locations where a right turn on red is permitted, drivers who fail to come to a complete stop before turning may be considered red light runners. Violations also include people turning right on red at intersections where doing so is prohibited.”

To their description, we would add two caveats:

While some drivers are reckless, and don’t care about the others driving around them, some drivers are simply neglectful, which can lead to a serious car accident. Inattentive and dangerous drivers often cause red light accidents from:

Who is liable for a red-light accident?

This is where it gets tricky. Car accidents at intersections very often involve more than one vehicle. Sometimes, a speeding car crashes into the back of a stopped car at a traffic light, which then hits the car in front of that one, and that one, sending another car out into the intersection and possibly crashing with the cars there. Or if someone is taking a left turn and they are t-boned (hit in their side by the front of another vehicle), and the impacted vehicle spins off and collides with another car.

As one can imagine, the person who hit you may not be the person liable for the accident altogether. There may be multiple parties which share liability. Further complicating matters is that Arizona is a comparative negligence state, which means that if you are found to be partially responsible for your own injuries, or share any liability for the crash, the amount of compensation you can collect may be decreased by the percentage of damage that you are responsible for. For instance, if a court finds that you are 20% at fault for the accident, and the defendant(s) are responsible for 80% of the accident, then you can only have 80% of your damages compensated. Best to speak with a Phoenix car accident lawyer as soon as you can, to ensure that you have someone representing your best interests.

Being involved in a red light accident can be devastating. The injuries one can receive from such a crash due to someone’s negligence or reckless driving are often severe and can have life-long consequences. The victim of such an accident should not have to pay for someone else’s choices. If you have been involved in a red light accident, make sure to document who was involved and see a medical professional. After that, get in touch with a Phoenix car accident attorney. At Plattner Verderame, P.C., we have lawyers with years of experience and knowledge that can ensure that you receive the compensation you deserve from everyone who may have caused your injuries. To schedule a free consultation at our Phoenix or Tempe offices, call us or visit our contact page.