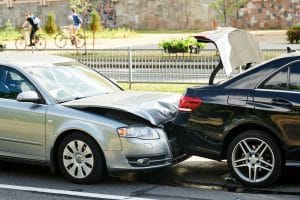 There are three basic ways that a car can be involved in an accident. The first is when a driver loses control of their vehicle and collides with a fixed object (a single vehicle accident). The second is when the vehicle strikes a second car. The third is when there are multiple collisions involving multiple cars, like chain-reaction accidents. There are also accidents involving pedestrians and bicycle riders, but this discussion will focus solely on accidents involving cars.

The rights of an injury victim and the liability of the at-fault driver can all differ, depending on whether a crash is a single, double, or multi car accident. The investigation of the accident and how personal injury claims are handled also depends on the number of vehicles involved in the crash.

Single car accidents can include the driver of the vehicle as well as any passengers. Examples of single car accidents include cars that veer off the road, crash into an embankment, roll over, strike a tree, or crash in some other way without involving any other vehicles.

A driver cannot file a claim against him or herself, which generally means that an injured driver in a single car accident can only file a claim if a defective car part (such as faulty brakes) or poor road design, caused the accident.

Generally, the driver’s liability insurance carrier will be liable for the passenger’s medical bills, lost income, and any scarring or disfigurement. Our injury attorneys can also help if the driver did not have insurance or did not have enough insurance to pay the damage claim. In cases where the driver was intoxicated, the establishment which provided the alcohol may also be liable under Arizona’s “dram shop” laws. In order to pursue damages in a dram shop claim, we must prove that:

Two-car crashes are quite common in Arizona. These types of accidents include head-on crashes, broadsides, sideswipes, and rear-end crashes. Many two-car accidents happen at intersections. Two-car accidents also happen when cars are merging, passing, or changing lanes.

The causes of two-car crashes are generally the same as for single-car crashes. Additional causes may include a failure to yield the right of way to another vehicle or running through a stop sign.

A major difference between accidents involving two cars as opposed to one car is that liability is much more of an issue. When two car accidents happen, each driver is likely to blame the other driver, and each driver will have his/her own version of how the accident occurred. The investigation of the claim is similar to a one-car accident, with the additional concerns that our lawyers will:

In some cases, both drivers may be partially at fault ,which requires assigning proportional blame to each driver. The drivers could each file claims against each other. The passengers could file claims against both the driver of their car and the driver of the other car involved in the accident. The issues of what insurance coverage pays for the victims’ damages becomes more complex.

Our experienced car accident attorneys can explain the ins and outs of liability and insurance coverage in a consultation.

The complexities of liability increase dramatically when three or more cars collide.  Many multiple vehicle accidents occur due to what’s called a “chain reaction.” A classic example is when a line of cars are stopped at a red light. A distracted driver fails to notice the stopped traffic and hits the last car, which pushes it into the vehicle in front of it, which pushes that one into the car in front of it, which can continue for multiple vehicles. In this type of case, the distracted and speeding driver is generally liable for the injuries experienced by anyone in the stopped cars.

Some multiple crashes can involve multiple accidents. For example, a drunk driver may cross into an oncoming lane, striking a Ford Escort. The Ford Escort may then swing around and strike a Chevrolet in the next lane over. The Chevrolet may then be struck by a driver who was speeding, and would have missed the Chevrolet if the other driver wasn’t speeding. This type of multiple car accident is very complex. It’s also the type of accident our Phoenix injury lawyers can handle.

We work with investigators, the police, and through the discovery process so we can analyze each accident, one at a time. We can also work with traffic reconstruction experts who are skilled at analyzing fault in multiple-accident cases.

In multiple vehicle accident cases, there are also multiple plaintiffs and multiple defendants. Once the liability of each defendant is determined and damage awards are assessed, we work to ensure that the appropriate insurance companies pay your claim, and you secure the compensation to which you are entitled.

At Plattner Verderame, P.C., we are seasoned personal injury lawyers. We have a strong record of jury verdicts and settlements in car accident cases. We handle all types of accidents – from simple one-car accident crashes to complex multiple vehicle crashes. If you were injured or a loved one was killed in a car accident, call us at 602.266.2002 or complete our contact form to schedule an appointment at our Phoenix or Tempe offices.