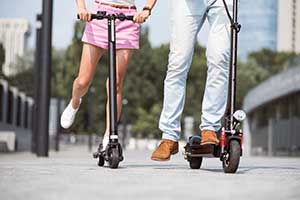 Electric scooters have become all the rage – and all the nuisance. E-scooters, according to Arizona Bike Law, are electric-powered bikes that travel up to about 15 mph. They are most popular where there are “sharing” systems. Riders unlock the bikes at one location, ride them, and then lock them at another location. Some Arizona places such as Tempe already have them. Phoenix, Arizona will soon be experimenting with e-scooters in the downtown area.

At Plattner Verderame, P.C., our Phoenix vehicle accident lawyers have the experience and resources to help you get justice. Since 1991, we have been fighting for the rights of accident victims in Arizona. In e-scooter accident cases, we quickly work to examine the e-scooter, any rental agreements, and the scene of the accident. We work with your doctors to help you get a correct diagnosis and to understand your long-term medical needs. Contact us today for help.

IT Still Runs defines electric scooters as having a top speed of 20mph and a motor of less than 750W. There are no current state laws governing e-scooter usage though several bills have been proposed in the state legislature. (Federal laws are different) Currently, the following provisions are a good starting point for understanding the rules that apply to motorized vehicles other than vehicles with four or more wheels:

Why e-scooters are dangerous

According to AP News, e-scooters are in use in more than 100 cities worldwide. AP reports that since the start of 2018, nine rented scooters were involved in rider deaths and another two victim-owned scooters were used in separate deaths. Consumer Reports recently investigated e-scooters and found that there were more than 1,500 e-scooter accidents in 2018:

Yet hospitals aren’t tracking these injuries in any measurable way – and neither are Bird nor Lime. As a result, we have no idea how dangerous dockless scooters actually are.

Aggressive and irresponsible behavior of the rider leads to injuries

This behavior is leading to crashes. Sometimes, it’s a driver who cannot stop in time. Sometimes, it’s a person opening a door onto the sidewalk and accidentally hitting a rider. In other cases, inexperienced riders are careening into traffic and into one another. In some cases, people who are too drunk to driver are trying to be responsible by leaving their cars, but drunken “scooting” is just as dangerous. All of these actions, whether intentional or not, can lead to injuries.

Technology moves faster than the laws

The truth is, most cities were woefully underprepared for dockless scooters, and Phoenix is no different. For example, who needs the insurance if a dockless scooter travels more than 20 mph? Technically, it should be the companies, like Bird and Lime, which carry the policies. But if you are injured while riding a scooter, and the driver who hit you is underinsured, you could face additional problems.

The companies themselves are also at odds with legislation. In 2018, Bird sponsored legislation to remove the helmet requirements for adult e-scooter riders in California, and the company won. Yet both companies give out free helmets. In fact, Lime claims to have given out almost 250,000.

There are mechanical issues that have not been properly addressed

These scooters accelerate quickly. For inexperienced riders, this sudden burst of speed can result in being thrown from the scooter, or being unable to stop before riding into traffic.

More problematic, perhaps, is that sometimes they simply… stop working. In a piece published by CityLab, a scooter rider described her experience when her scooter simply died (despite a 66% battery charge), causing her to fall.

Her experience is not singular, and the lawsuit have already begun. Per CityLab:

“Perhaps the most high-profile case was filed in October, when Bird and Lime, along with two manufacturers of the vehicles they use, Segway and Xiaomi, became the subject of a putative class action suit filed in Los Angeles County Superior Court. Nine plaintiffs accused the companies of ‘indiscriminate, negligent, grossly negligent and/or unlawful “deployment” … of fleets of defective’ scooters in the city. The case is still pending.”

Who can be liable in an e-scooter accident?

If you are injured while riding an e-scooter, or because you tripped over a scooter left lying on the sidewalk, or because of a defective part, you could be entitled to compensation for your injuries. Our Phoenix e-scooter injury lawyers seek to hold any or all of the following liable for an e-scooter crash:

Types of injuries from e-scooter accidents

The type of likely injuries from e-scooter accidents depends, in part, on how the accident happened. A driver who hits an e-scooter rider may kill the rider, or leave him/her with life-altering injuries. A rider who strikes a pedestrian will likely cause the pedestrian to fall.

Possible injuries from e-scooter accidents include

Victims who can show another company or person was liable can seek damages for pain and suffering, lost wages, and all their medical expenses. In some cases, we may seek punitive damages.

The laws on e-scooter usage are changing. It’s hard for cities to keep up with the changing technology. Often, the best course of action is to file a civil claim against the manufacturer, e-rider, or driver who caused the accident. At Plattner Verderame, PC., our lawyers work with investigators and product professionals. We speak with witnesses and demand answers and justice from those people and companies that put their fun or profit before your safety. Call us today at 602-266-2002 or use our contact form to schedule an appointment.